In evaluating the spate of info-stealing malware being distributed over past couple of months, the Zscaler ThreatLabz research team has come across an interesting campaign. The PHP version of Ducktail Infostealer is actively being distributed by pretending to be a free/cracked application installer for a variety of applications including games, Microsoft Office applications, Telegram, and others.

Ducktail has been around since 2021, and is attributed to a Vietnamese threat group. Campaigns to-date have focused on taking over Facebook Business accounts, both to manipulate pages and to access financial information.

This blog will show the attack chain, decipher and explain the stages of execution, and provide technical analysis of the PHP code of Ducktail Infostealer.

The following figure is a pictorial representation of how the PHP version of Ducktail stealer is being distributed and its execution on the victim's machine. 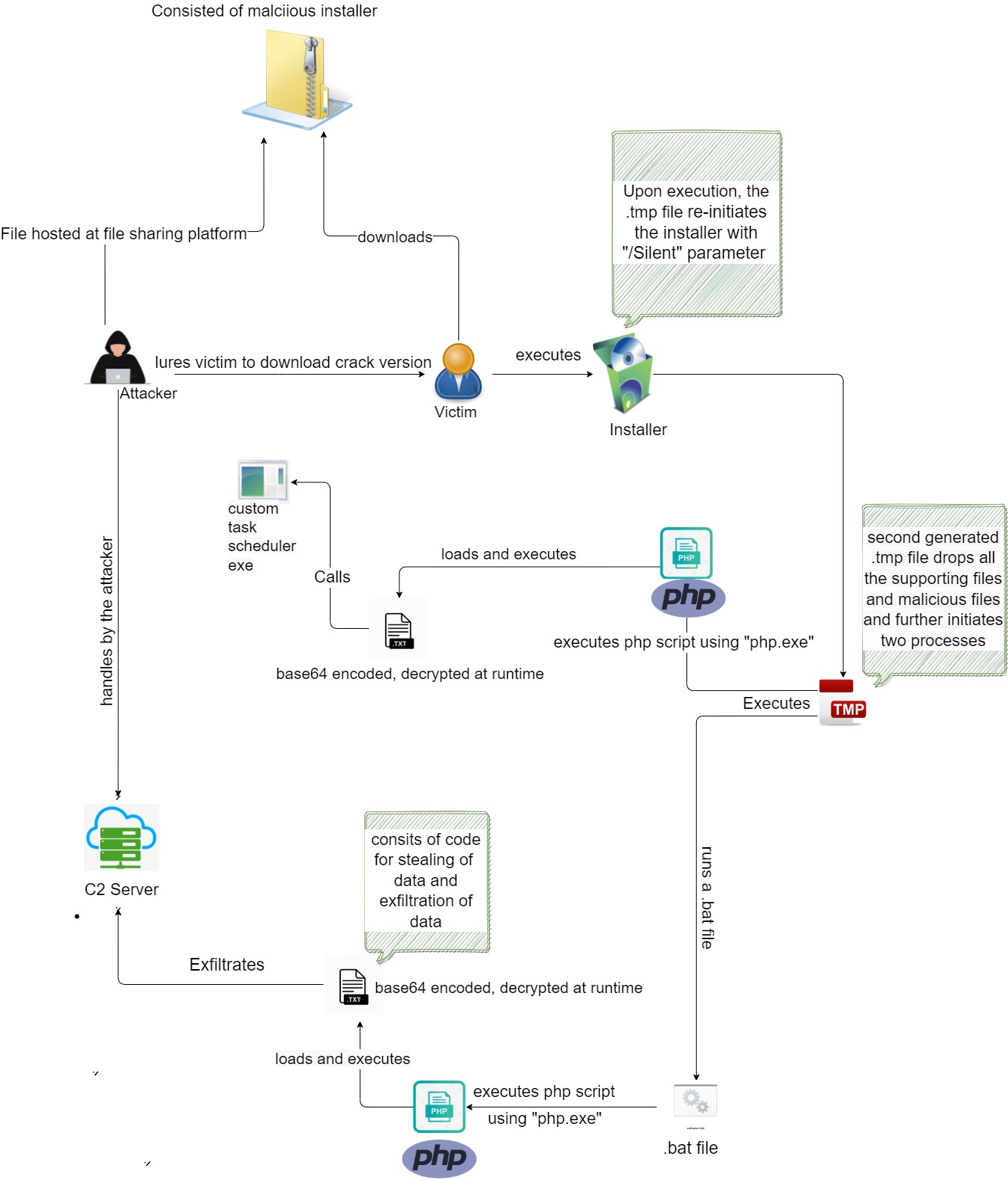 Similar to previous attacks, the malicious installer is being hosted at a file hosting website which in our case was “mediafire[.]com”.

However, compared to previous campaigns, changes have been made in the execution of malicious code. Now, the threat actors have switched to a scripting version whereby the main stealer code is a PHP script and not a .Net binary.

For the purpose of analysis, we have taken DF071DF2784573C444CA6E1421E3CB89 md5 to demonstrate the execution flow and to explain the PHP script carved out from the same.

Upon execution, the fake installer pops-up a ‘Checking Application Compatibility’ GUI in the frontend. In the backend, it generates a .tmp file that re-initiates the installer with “/Silent” parameter and thereafter another .tmp file gets generated. The latter generated .tmp file then drops all the supporting files and malicious files at “%Localappdata%\Packages\PXT\v2-0\” location (in our present scenario) and then executes two processes (as depicted in above figure) to achieve the below mentioned purposes.

To achieve persistence, a series of events takes place to execute the malicious payload, named “libbridged.exe”, on the system. Its purpose or functionality is to schedule tasks in three forms to ensure that the malicious code gets executed on a daily basis and on regular intervals.

In order to achieve the same, a PHP script is passed as an input to the php.exe rather than directly leveraging the job scheduling binary. The PHP script (in our present case named as “switcher.php”) consists of code to decrypt a base64 encoded text file (which in our case is named as “switcher.txt”). The execution of the decrypted version of the text file will lead to the execution of the custom job scheduling binary as the final outcome, as shown in the below screenshot.

The job scheduling binary is a dotNet binary. The below figure exhibits the code present inside the binary, aiming to schedule tasks at three different levels. 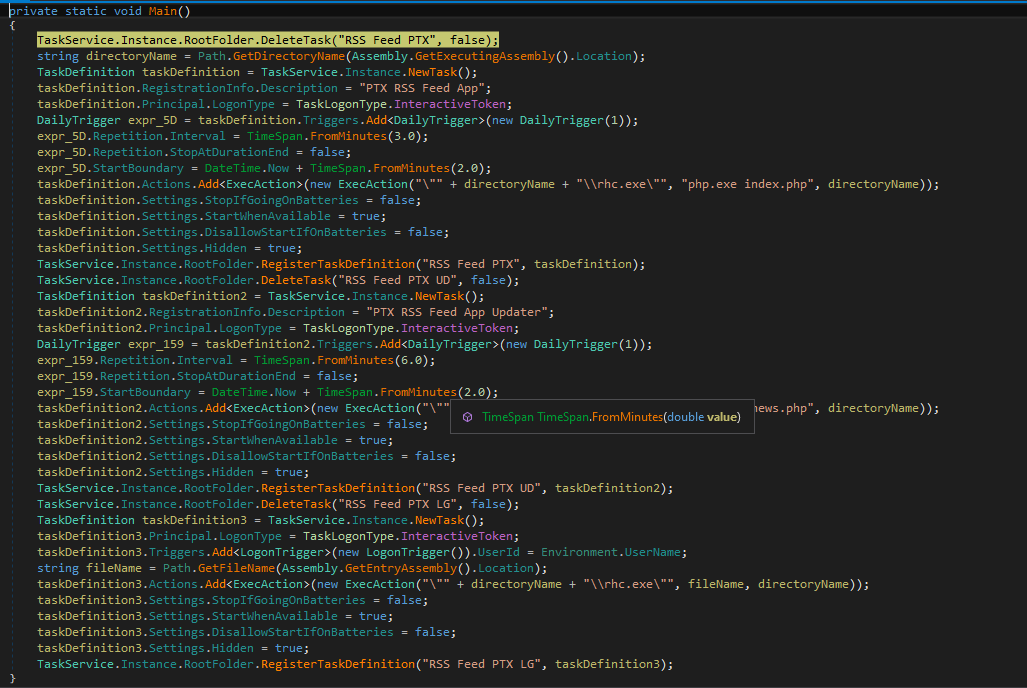 Stealing of data and its exfiltration:

Similar to previous steps, the stealer code also gets decrypted at runtime in memory and subsequently performs stealing operations and exfiltration of data. The code explanation of the same will be discussed later. It is worth noting that instead of making a one-go binary that would perform all actions, the threat actors have divided the execution into parts based on their intended purpose. With that,  let’s dive into the technical analysis of the Ducktail PHP code.

Here, the primary task is to call a PHP script which performs malicious functions in the system. Instead of calling the script directly, it walks through a sequence of steps. We are able to fetch the decoded malicious code through memory and following are the findings of it:

Firstly, the stealer creates PHP Associative Arrays which will be used at the time of sending the data to C&C. Please find the following screenshot for this: 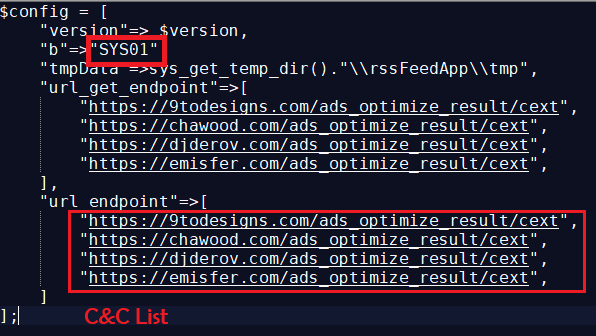 It uses the CURL command for receiving and sending the files over HTTP. Below is the list of switches used by malware during communication :

The following table articulates the various functions performed by the stealer:

The malicious script collects information about installed browsers in the system and extracts the required data from it such as machineID, browser version, and filename, and copies this data. It performs following steps during browser stealing:

Please find the screenshot below:

The malware scrutinizes the various Facebook pages to steal information from them. These pages belong to Facebook API graph, Facebook Ads Manager, and Facebook Business accounts. It uses the c_user argument which is placed by Facebook to fetch the unique User ID of the victim machine, as shown in the below screenshot.

Looking over Facebook Business Ads Manager links, the malware will try to get details of accounts and payment cycles which it will later combine with details that have already been fetched from the local state file.

The following are the details that the malware attempts to fetch from the Facebook Business pages:

Post infection, the PHP script tries to connect to the C&C server to get the list of contents stored in JSON format, which further will be used to gather information. The URL pattern of the same is shown below:

Instead of using the hardcoded targeted folder names and URLs, the threat actors have kept a list of targeted folders and URLs which gets downloaded from the C&C panel first and then the information is collected.

Figure 11: Contents kept at C&C location which will be used for achieving successful implementation of stealing code

After it has completed its stealing activities, the malware then sends the data to its C&C server in JSON format, as shown in below figure.

It seems that the threat actors behind the Ducktail stealer campaign are continuously making changes or enhancement in the delivery mechanisms and approach to steal a wide variety of sensitive user and system information targeting users at large. Zscaler’s ThreatLabz team is continuously monitoring the campaign and will bring to light any new findings that it will come across.