Ares Malware: The Grandson of the Kronos Banking Trojan

Kronos is a banking trojan that first emerged in 2014 and marketed in underground forums as a crimeware kit to conduct credit card, identity theft, and wire fraud. In September 2018, a new Kronos variant named Osiris introduced several new features including TOR for command and control (C2) communications. The last update to Osiris appears to have been around mid-2019. In February 2021, Zscaler ThreatLabz identified a new Kronos variant that surfaced via spam campaigns to German speakers, which calls itself Ares. In Greek mythology, Ares is the son of Zeus and grandson of Kronos. Thus, the naming convention appears to refer to this new malware variant as the third generation of Kronos. Ares still appears to be in development alongside an information stealer that harvests credentials from various applications including VPN clients, web browsers, and the malware can exfiltrate arbitrary files and cryptocurrency wallets.

The threat actor behind this new variant continues to use both Osiris and Ares in parallel. In this blog post, we will examine these new malware developments and campaigns.

Recent samples of Osiris and Ares have been protected by a malware packer written in C++ that calls itself DarkCrypter. The packer contains the PDB path d:\scm\Italy\dopplegang\DarkCrypter\Bin\Clean.pdb. The code is not related to the commercial packer, DarkCrypter, that has been cracked and leaked online. Interestingly, the packer shares code with Kronos and Osiris including the string encryption algorithm. When the string table is decrypted, the first 41 entries are identical to older Kronos variants with eight new string additions (shown below) to detect sandbox environments:

If the anti-analysis checks pass, the packer proceeds to the next step. There are at least two variants of the packer.

The first variant decrypts the next-stage payload using Blowfish. However, the decryption process uses a non-standard Blowfish key size. Typically, Blowfish key sizes are between 4 bytes and 56 bytes. However, the Blowfish decryption implementation in DarkCrypter supports a hardcoded key size that is 288 bytes (although only the first 72 bytes are effectively used). This may be designed to break cryptographic libraries that implement Blowfish and follow the standard, where the maximum key size is limited to 56 bytes. The Blowfish key is located by computing a djb2 hash of each section name in the PE header. The code compares the resulting hash value with two hardcoded values that map to the section names .text (0xb80c0d8) and .sjdata (0xecae6faa).

The second variant of the DarkCrypter packer embeds the second-stage payload in a compressed format rather than an encrypted Blowfish format. The compression algorithm is identical to that found in Ares, and components related to Ares, including a packer that impersonates a bitmap image header.

The threat actor has also experimented with modifying UPX headers, which has well known section names. The modifications that have been made by the threat actor replace the UPX section names (UPX0, UPX1, ...) with standard section names like .text, .data, and .rdata. This breaks compatibility with the command-line UPX decompression tool, although the file can still be decompressed and executed. An example of the file header modifications are shown below in Figure 1 on the left, with the alterations highlighted in red. 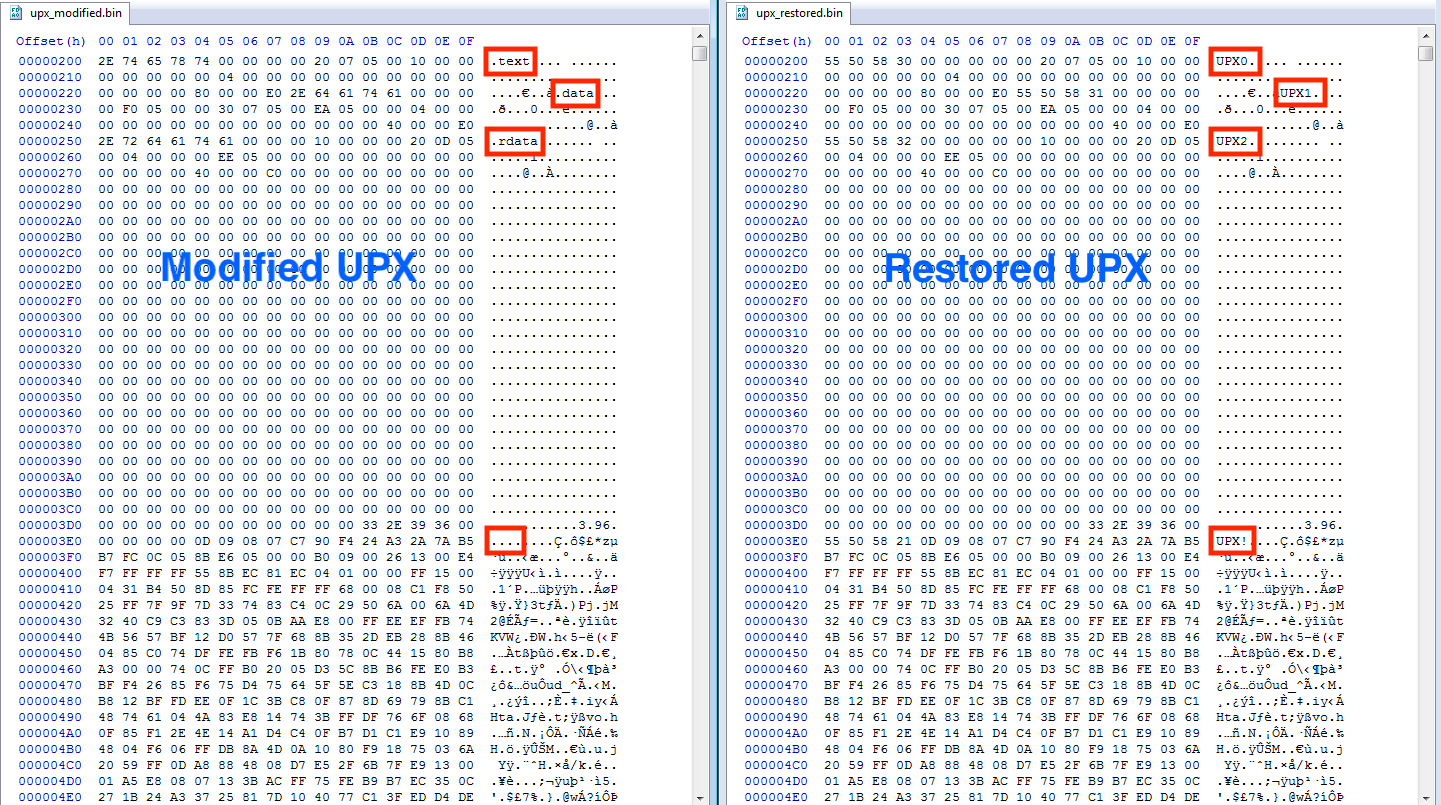 These changes can easily be restored to the original UPX section names as shown on the right in Figure 1. The UPX command-line utility can then be used to statically unpack this binary, producing the final executable payload.

The threat actor has also been using another packer that Zscaler ThreatLabZ has dubbed BMPack. This packer has been utilized to pack both Osiris and Ares payloads. BMPack first decrypts embedded data using an XOR-based algorithm, followed by RC4. After the decryption stage, the file appears to be a bitmap image as shown in Figure 2.

Each decompressed structure holds a different section of a PE file that is reconstructed and stitched together by a custom loader, and executed.

Ares is being actively developed and the malware author continues to create and test new plugins and web injects. In the most recent Ares samples, there is an embedded DLL module that is compressed within the binary. The module contains an export that is designed to establish persistence. The code first copies itself to the location %APPDATA%\Adobe\AdobeNotificationUpdates.exe. It then creates a scheduled task named AdobeNotificationUpdates that is designed to execute Ares every two hours (with an expiration date of 2050-05-02 12:05:00). Similar persistence code is also found in many DarkCrypter samples.

The Ares persistence module has the same compilation prefix as other modules in its PDB path D:\scm\Italy\ares\source_ob\Release\startup.pdb. Ares attempts to locate an export name with the hash value F4S4G3S4U7C6P2P7, which maps to the string [email protected]@[email protected]. Once the address of this function is located, Ares executes the module.

Ares uses the same function hashing algorithm as Kronos, which consists of calculating a CRC64 hash, converting the digest to uppercase hexadecimal characters. The result is then mapped to an alphanumeric value as shown in the Python code below:

Ares contains most of the same code as its predecessors: Kronos and Osiris. However, there are several notable differences between Osiris and Ares, especially with respect to the C2 communications. Most Ares samples currently do not communicate with C2 servers over TOR. It is not quite clear, why most Ares samples have the TOR component removed, but it may be to reduce the malware's file size and evade corporate firewalls that block TOR network traffic. However, without TOR, the C2 servers are more vulnerable to takedown attempts. Some Ares samples attempt to address this limitation by hardcoding a large number of C2 URLs in the binary. Zscaler ThreatLabz has observed one Ares sample with 101 hardcoded C2 URLs.

Ares has also slightly modified the bot ID generation code, replacing the string Kronos with the string Ares as shown in Figure 4.

Ares uses the HTTP query string parameters shown in Table 1. The HTTP request that sends the report.zip file is unique to Ares and discussed in more detail below.

Ares supports many of the same commands as Kronos and Osiris. However, some of the commands have been modified and the malware uninstall command (0x1) was removed. There are four modified commands that are supported by Ares as shown below in Table 2.

The commands 0x3 and 0x4 attempt to set a registry value name MSE to zero and one, respectively, under the registry key HKEY_CURRENT_USER\Software\Microsoft\CurrentVersion. However, this registry key does not exist and both functions will fail. This is likely an oversight by the malware author who accidentally left out Windows in this registry path between Microsoft and CurrentVersion. The registry value is not referenced elsewhere in Ares, so it may hint at a future use.

One of the most significant modifications is the command 0x6 that downloads, decompresses, and maps a PE file into memory, and executes it. Command 0x6 specifically searches for an export name with the hash value C3E0Q6R7F1H2G5A4, which maps to the string CollectInfo. The code passes two string parameters to the CollectInfo export. The first string is a pattern provided by the C2 server and the second is hardcoded to the string %APPDATA%\Google\report.zip. Zscaler ThreatLabZ has observed this Ares command being used to download a file from the URL http://mydynamite.dynv6[.]net/panel/upload/stealer.dll. The first four bytes of the response are the uncompressed file size. The file is decompressed using the same compression algorithm as BMPack.

Ares has code artifacts from the development of command 0x6. Samples contain an unreferenced function that attempts to open a file located at d:\scm\Italy\ares\source_ob\Binaries\Release\KittyDll.dll.cmp. The file is decompressed and mapped into memory using the same process as command 0x6. After the file is mapped, the export CollectInfo is called with the parameters: %userprofile%Documents|*.txt|5 and NULL. The purpose of these fields will be described in the next section. Note that there is a missing backslash character between %userprofile% and Documents. This string serves as a directory path, and without the backslash the path is invalid.

Zscaler ThreatLabZ has also identified Ares samples that contain another unreferenced function that loads a VNC plugin by attempting to open a file located at d:\scm\Italy\ares\\source_ob\Binaries\Release\vnc.dll.cmp. Similar to the stealer plugin, the file is decompressed, mapped into memory, and the export MakeItStart is called. The MakeItStart export name is resolved similar to the other Ares functions using the same CRC64-based hash algorithm and comparing the result with F0U5R4R6Q8H1P3E5. Ares then will terminate the VNC plugin by mapping the export name MakeItStop using the same process and comparing the result with the hash value C6P3T6Q8H1P3E5A8.

The command 0xC is the most recent modification to Ares and only found in newer samples.

Ares Stealer is downloaded by Ares and invoked via the export name CollectInfo. The malware is written in C++ and uses the Boost and Curl libraries. Ares Stealer has compilation artifacts showing that the Boost library was compiled in the directory d:\scm\Italy\tools\boost_1_74_0\boost. This directory prefix is identical to the DarkCrypter’s PDB path and the location where the Ares unreferenced test functions attempt to load plugins from. This artifact along with the shared compression code suggests that the malware author likely has developed DarkCrypter, BMPack, Ares, and Ares Stealer.

The Ares Stealer export CollectInfo takes two parameters: a pipe-delimited string and a filename string. The pipe-delimited string takes three arguments, which are used by the stealer’s file grabber feature. The first parameter is the directory in which to start the file enumeration process, the second parameter is a search pattern, and the last parameter is the directory search depth. The filename string is used to store the results of the extraction, which are added to a zip file.

An example command string observed from an Ares C2 server is %userprofile%|pass*.txt|5. This command will search a victim’s user profile directory up to five levels deep for text files that have the prefix pass.

The stealer will attempt to extract information from the following applications:

The Osiris version that has been used by this threat actor contains a number of new features since the original version that appeared in April 2018. These updates were introduced around mid-2019 and include the following changes:

The threat actor has an Osiris C2 server that is located at http://ylnfkeznzg7o4xjf[.]onion/kpanel/connect.php, which has been instructing infected systems to steal and exfiltrate web browser and email credentials. The web browser harvesting command downloads a sqlite3 library from http://qqkzfkax24p4elax[.]onion/kpanel/upload/sqlite3.dll, which is a dependency to extract Google Chrome passwords. A second module for harvesting Firefox credentials from a 64-bit system is downloaded from http://qqkzfkax24p4elax[.]onion/kpanel/upload/ffc64.exe.

The C2 is also serving a web inject configuration file, which targets clients at German financial institutions with the URL patterns shown below:

When a victim browses to a website that matches one of these patterns, JavaScript code will be injected from the threat actor’s domain https://securebankingapp[.]com/.

The full list of web injects for this Osiris instance is shown here.

The threat actor has another active Osiris C2 server located at http://qqkzfkax24p4elax[.]onion/kpanel/connect.php. This C2 server is also serving commands to exfiltrate credentials, but the web inject configuration file is blank. However, the C2 server is also providing commands to extract a victim’s email contact list using Nirsoft’s OutlookAddressBookView, which is downloaded from the following locations:

Ares is a new fork of the Kronos banking trojan that appears to be in the early stages of development. The code contains several bugs and unreferenced code segments that are likely used for debugging purposes. The threat actor has invested significant resources in building DarkCrypter, BMPack, Ares, and Ares Stealer. Therefore, activity related to this threat is likely to increase as the malware continues to mature.

The following IOCs can be used to detect Osiris and Ares infections.

These rules are valid on unpacked Kronos, Osiris, and Ares binaries.